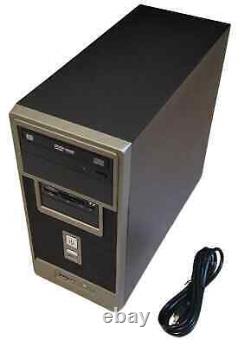 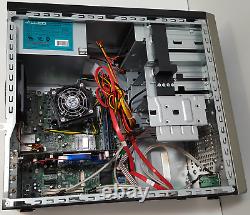 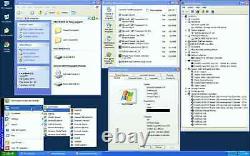 This listing is for a BRAND-NEW, in-the-box, Desktop PC specifically customized for the Windows XP era of games. Every single component, right down to the cables, is brand-new or new-old-stock. Intel Core 2 Duo E8400 Processor (or possibly a nearly identical E7600). 128GB Lexar Solid State Hard Drive. NVidia GeForce GT130 video card w/768 MB vram. 6x USB 2.0 ports (4 rear, 2 front). 300 or 350 Watt PowerMan or Allied Power Supply. I have several Windows XP builds that I custom-build and sell, with this being one of the higher-end builds. The GeForce GT 130 video card, combined with a 128 GB solid state hard drive and a Core2Duo E8400 CPU (one of the fastest dual core CPUs of that generation, third only to the E8500 and E8600) provides a machine capable of playing most DX8 and DX9-era games. The video card is DX10-era card and thus has high compatibility with DX8-DX9 games while also having lower power consumption than the high-end DX9 cards of the time.

This card marginally outperforms the Radeon x1900XT and thus will play all but the latest XP generation games at max or mid-max settings and will even play games from very late in that era at at least medium settings. Overall this is a power-efficient build. Idle power is around 72 watts while maximum power measured at the wall when stress-testing with 3dMark06 was around 135 watts. The power supply will be rated at either 300 or 350 watts (depending on what I have in stock to install). I now benchmark all my XP-era builds using 3dMark versions 01, 03, 05, and 06.